In 2019, the PIV Market has perhaps entered a “market correction” as analysts like to say about the stock market. The PIV Market saw a downturn in PIV cases and ANDAs filed, dropping 13% from the prior year. Here are the highlights:

Here’s the graph over the past decade of PIV cases — 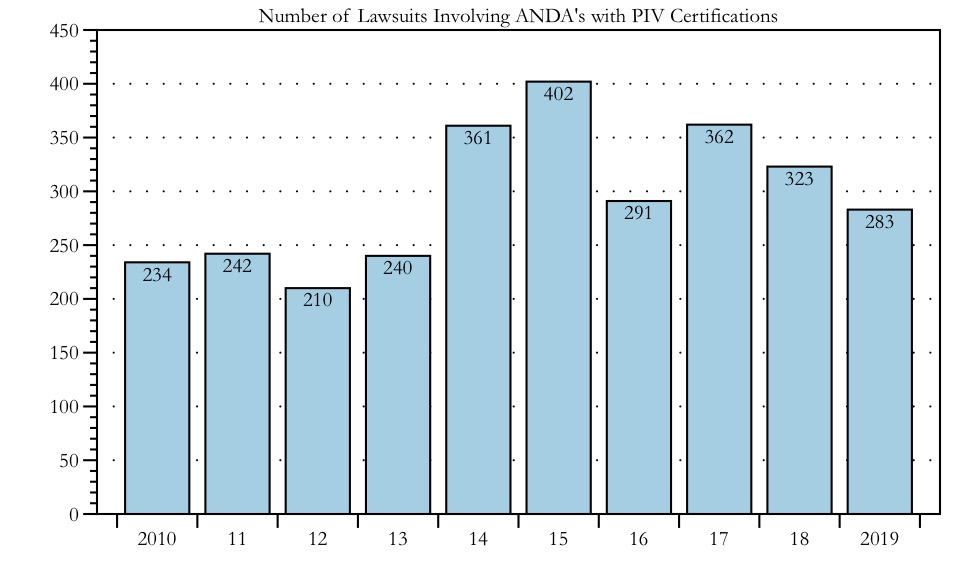 This is not necessarily a bad thing. In years prior, there were many NCE-1 products with dozens of ANDA filers. These hyper-competitive products were not present in 2019, and the market seems to have gotten past them.  Fewer cases, coupled with the steady stream of new market entrants, suggest that generic companies are starting to be more selective in their portfolio selection. The market appears to be correcting itself.

Along with portfolio selection, the PIV Market has corrected in terms of IPR filings. I covered the downturn in IPR petitions in a prior blog post. After hitting a high of 130 petitions in 2015, ANDA filers submitted only 34 in 2019, a 73% drop. ANDA filers have evidently realized that IPR petitions should be used sparingly.

The Court of Appeals for the Federal Circuit in Arthrex Inc. v. Smith & Nephew (#2018-2140) issued an unexpected ruling in late October. For the past 8 years, the Director of the USPTO hired the dozens of judges that comprise the Patent Trial & Appeal Board panels. The Court of Appeals decided that the Appointments Clause of the U.S. Constitution required the President to appoint the judges. As such, the judges are not constitutional, in a sense. While this may sound alarming (“are the PTAB rulings issued over the years valid?”), Arthrex Inc. may prove to be more like a sound of a cat walking across a carpet. The Court appeared to remedy this problem in the Opinion itself, and it may affect a handful of IPR proceedings. But you never know how this plays out as it’s uncharted waters. Arthrex v. Smith & Nephew

If you were like me and thought that the U.S. Supreme Court had the last word on settlements in PIV cases in 2013, you would be wrong. As documented and discussed in ParagraphFour.com over the years, the FTC has attacked settlements in PIV cases using novel legal theories that courts consistently rejected. But the FTC hasn’t given up. In March 2019, the FTC’s administrative judge concluded the IMPAX Lab settlement of Opana ER®(oxymorphone) violated antitrust law because it restricted Endo’s ability to launch an authorized generic. IMPAX has appealed. I will likely cover this topic in more detail in a later PIV Blog post.

While certainly an unpleasant topic to cover, I would be re-miss to ignore it. In May, a dozen states filed a civil (not criminal) antitrust case in Connecticut District Court (#3:2019cv00710) against about a dozen generic companies and several of their employees. In short, the 524 page Complaint asks for damages as it alleges these companies and individuals conspired to fix market share and prices of certain generic products. A Complaint, by its nature, is one-sided, alleging facts that establish its claims against the named defendants. There may be several counter-balancing facts that the defendants may present as well as viable legal defenses to the allegations. It goes without saying that such alleged behavior smears the industry. Hopefully, regardless of resolution, it is a lesson learned.