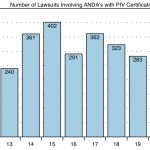 In last year’s 2020 Annual Review – Market Correction, I noted that there was a decline in PIV cases from previous years. While a decline, the numbers were never to their lowest point. It seemed that the PIV Market was returning to its normal patterns before the large number of cases filed in 2014-2015.

While there was a 10% decline in PIV cases filed from last year, it appears to be a further market correction from year’s prior. There was a further, more significant, decline of 27% of ANDAs filed from 2020. These declines are also coincident with declines in IPRs filed, though the decline of of IPRs is likely for different reasons as discussed in Diminishing IPRs.

Of course, simply citing PIV cases filed leaves out some broader context. The other important data point is the number of brand products filing their first PIV case. This figure suggests an overall health of the PIV Market because it identifies the number of new brand products to reach the market as well as those ANDA filers certify against. As the Graph illustrates:

Last year’s number of brands initiating their first PIV cases in 2021 was a drop from last year but still within reasonable range of year’s prior. Other factors are involved in these data (for example, number of new NDAs approved in prior years) so these data do represent a decline but relative market health.

Like most markets, there is a natural ebb and flow. While the PIV Market has seen some declines over the past few years, these appear to be more of the market correction variety rather than a permanent trend. The next couple of years may see a flattening of the PIV activity, but it would not surprise me to see an increase in PIV activity over the next few years.